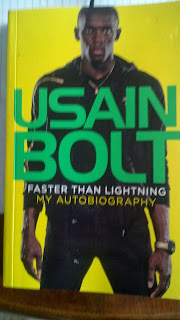 Good read, well constructed, starting with his life-pivoting car crash in 2009, then dipping back into his childhood to start the life path to track glory, which for all champions, whatever the endeavour, is pretty much all practice, practice, train, train, blood, sweat and tears, till more perfect than the opposition.
Even at my pathetic level of achievement in athletics I could relate exactly to the slo-mo recount of the sprint race experience Bolt does so well.
Then there's all the rest of it, ability to cope with expectation, both own and others, motivation, and the all important mentors, plus family environment shaping the individual.
Good book, narrated in nice easy yo bro style.
Well done Usain, you my Hero!
Posted by johnnyreb at 2:38 PM No comments:

Big surprise here, didnt know what to expect.
Have to admit Whenua Patuwai, (runner up in this year's X-Factor NZ), was a major attraction for me, as he was for many others according to the booking office.
Whenua sounded a lot better on stage than he did on TV, I think he's come on heaps since then, incredible voice, powerful for someone still quite young.
His bracket of songs was well received, certainly he's not short of a fan base, even had a couple of teenies rush the stage to give him a hug. Half time......
Then it was Stan.... searchlights, showband, backing group, dance troup, it was all on, fantastically constructed show.
Stan himself doing the moves with a great hip-hop gangsta dance team, doing his popular numbers and more.
The backing group did a bracket, and I particularly liked Troy Kingi and his acoustic guitar work.
11 out of 10, and I'd go see it again.
Posted by johnnyreb at 2:11 PM No comments: 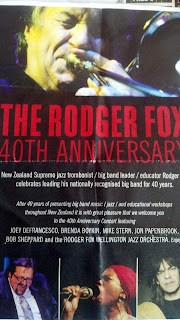 A real treat for the audience that pretty much filled downstairs at Palmerston North's Regent on Broadway,
a two and a half hour non-stop jazz concert superbly crafted by Roger Fox.
While knowing the Fox Big Band was always worth a listen, I went mainly to hear guitar guest, Mike Stern, and that was really nice stuff, upper fretwork on an electric Fender or look-alike, mellow softer harp tone, but got a further shot to the fabulous with the other two guests.
Joey Defrancesco was billed as a hammond organ exponent, which was pretty good, but I thoroughly enjoyed his faultless and expressive "flugelhorn", (he called it), like a bugle, but bigger horn and mellower, fuller, plaintive sound.
Brenda Boykin was a sweet surprise for me too, not being all that familiar with the jazz scene, strong, powerful, accurate, story-telling, as only a negress could do.
The local men from Wellington Jazz Orchestra did trombone and sax solos with accuracy and aplomb, and the evening wouldnt have been complete without a trombone lick from the Master himself.
Top show, I could go see it again. 11 out of 10.
Posted by johnnyreb at 10:13 AM No comments: