Dunno what I'm doing admitting to reading this book, lol...
Bought it as a walk-by, while picking up a lotto ticket in an Otorohanga bookshop.
Frankly, I'd just about stalled on it by the halfway mark, and struggled through to the end, waiting for something to happen.
For a really good review, go to:

Instead of a score out of 5, I'd say you'll have more fun with your money at the TAB.
Posted by johnnyreb at 1:13 PM No comments:

While the country went off last week on a national pie-making contest, we here in Wangas need do no more than call into Carlton Takeways where Bruce and Jo have added another couple of beauts to their fillings repetoire, a tripe number, which Bruce says he's touching up with a little curry addition, and a chicken, cranberry and cheese. Have had both..., yum!
They're a standard size pie, but chock full, light fresh pastry.
The shop's half a km west of the motorway bridge roundabout, on the main route round town.
Posted by johnnyreb at 1:04 PM No comments:

Been following the TdF, mySky each stage live overnight, then get on my stationary trainer, ride with them next day
an hour or more before breakfast, half or so at lunchtime, finish off in the evening, whenever I can fit a bit in
with them on the climbs and descents, and stretches between till the finish line,
but I have a few more drink stops.... lol

Going downhill is amazing, theyre doing up to 90 kph
got me to wondering, having ridden those roads last year on the Suzi Bandit
I know I'm not the fastest thing on a motocycle,
but maintaining that sort of speed in the Alps is a real stretch on a moto, let alone on a push-bike
and there are the press corp, threading through the field, at times passing the peloton, two up with the cameraman on the back

So researched a bit more...
the roads are not so much closed, as declared a sort of national territory
such is the French support of a sporting spectacle that's become a national treasure
The policing is done by the motorcycle division of the Republican Guard, an elite corp that among other duties protects the President,
escorting high ranking motorcades etc
European police motorcycle skill is legendary, look up on You-Tube
They ride mostly BMW's and Yamaha FJR, and have been doing TdF support so long, their knowledge how to fit around the cycling field is part of the landscape

Ditto with the press corps whose official mount is...., wait for it Geoff..... Kwaka Concours
I spotted a beaut yesterday, white, with red flash-work
There's as many motorcycles involved in total, police and press, as push-bikes, around 200
the TV live-coverage is high level art work synchronising roadside cameras, pillion cameras, and two helicopters in the air full-time
fed to 290 TV outlets world-wide, they estimate 3.5 billion people see at least a part of the 3 week race

Fantastic tourism promotion for France......
and me just one tourist lured there last year
France takes its road safety issues in quite a nice way
you see motorcycle schools all over the place
its compulsory to carry an approved breath-tester in your car

Posted by johnnyreb at 1:19 PM No comments:

Great Sight in the Morning Sky

Great sight in our southern hemisphere 6.am morning sky, Venus in the head of Taurus beside Alderbaran, with the Pleiades just off to the left, and Jupiter in between.
Be great if you're born a Taurean, all that love and power in one hit, lol.
Except, if you're an astrological purist ascribing to what the Sumerians brought to the table of knowledge over 4000 years ago, and due to Precession of the Equinoxes since.......
you're in the wrong house!
Astrologers will maintain that what you're born under is what's in their tables, but for me, I like what you see is what you get.
Have a happy time Taureans!
Posted by johnnyreb at 6:42 AM No comments:

Book: A Walk in the Woods

This the first Bill Bryson I've read, should have been on to him years ago.
This book describing his assault on the Appalachian Trail is an hilarious read, particularly if you've done some bush-whacking and have sampled the delights of getting on with others on the quest.
Similarly, I liked the backgrounder detail, again having sampled a little of the Great Continent and its people.
My simple farmer observation was that the bush there wasnt very old, the trunks weren't big enough to be of much greater age than 40 or 50 years, and indeed he explains the countryside was once all cleared but its agriculture lost competitiveness when the Mid-West eventually opened up.
He cites the large combine harvesters couldnt handle the small dales of the mountain country.
Its much simpler than that mate.......
Farming's a mugs game in any environment, but hell on earth in a place where winters are 9 months of the year, and summer's only 3 months.
Posted by johnnyreb at 10:09 AM No comments: 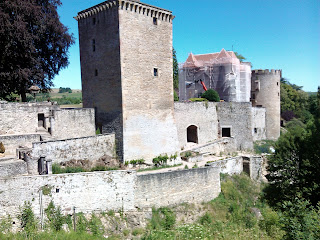 A note in yesterdays Dompost reminded visitors to the Olympic Games, who were thinking of slipping over to France for a drive around, that its compulsory to have in the car an approved breath-testing device.
On last years tour I found the driving environment most amenable, the signage was helpful and expressive of concern for your safety, rather than heavy fist of the law stuff like here.
I dont doubt however that it could be, the fines for DIC are pretty substantial, but a glass of wine with a meal is part of the nations fine culture, and the carrying of the breath testing device an elegant solution.
That motorists are given, and take, responsibility for their own actions is a nice touch
Posted by johnnyreb at 11:02 PM No comments: