Before I forget, 1200km on the CB between Boxing Day and New Year.
First to Wellington, stopping off for all-day b/f at Beachcomber Cafe, Waitarere Beach.
Worth the 5km diversion off the main drag, keeps good hours, good off-street parking, nice outdoors tabling for fine days, and wholesome tucker. 9/10.
Then on to Upper Hutt. Gave the Akatarawa road in from Waikanae a miss, nearly got bowled twice last time I tried it.
﻿﻿
﻿﻿﻿﻿
Just as an aside comment, I'm finding Subaru's the biggest vehicular road hazard to my biking. Is it something to do with financial availability to the not so mentally well-endowed? Could I make the same observation to next in line XR Falcons with their market-leading lease policies.
The Paekakariki Hill has something of the same rep with some bikers, but I think its an OK ride. 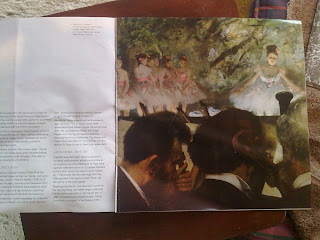 Overnight hospitality with US trip roomie Richard and 'Cinta, meeting up with Roger and Robyn for a decko at the European Masters Exhibition at Te Papa, (while Roger and Richard waited out at the Brewery place next-door), great to be able to spot a Monet, a Degas, and a Van Gogh, all from the same vantage point, privilege.......

On way home stopped at Red House Cafe, Te Horo. On sighting this place up on Google Maps once I'd got home, was somewhat surprised to see comments bagging it, some people are right hard to satisfy toss-pots.
Sure it wasnt hash-foundry cheap, but contrary to the comment, I thought the service was the equal of any city, and certainly more than I expected for a wayside inn, the menu was fine dining standard, and they "no problem" made up a special salad to order for me, as I only wanted to eat light on that occasion. 8/10 on JReb's scale.


Next day, it was saddle up again, heading for Tauranga to scope up a farm ute prospect, a glorious morning ride up the ParaPara,  TePonanga Saddle, Western Taupo, for a b/f stop at Whakamaru. Dunno the name of the cafe, but its on the right as you turn right towards the dam, and worth pulling into. 8/10 on this one.

Did the deal on the ute, and home again, jiggedy-jig.
Posted by johnnyreb at 12:45 PM No comments: