Four days in, and everythings going pretty well I'd say.
On the face of it, the only obvious difference is being able to keep going when you're in the left lane.
Fantastic. No hold up for through traffic, just stay in the left lane.
This rule change is just so obviously good for our modest NZ roads and streets where 2 lanes approaching an intersection is all you're most likely to get.
There'll probably be some inconvenience surface having to sit out in the right lane waiting for a chance to proceed, but around city blocks a little bit of fore-thought on the route, to avoid right-hand turns, will be useful.
Certainly, the increased circumstance to sit out in the middle lane on a bike, waiting for a right turn, is something to be avoided.
Riding USA and Europe has been an edifying experience. In UK you find the old right hand rule, which we've just changed back to, has persisted, and driving on the right hand side of the road in USA and France is the same, but round the other way as a left hand rule, except dear old France have one zany exception, vehicles coming in on your right have the right of way!
I think our authorities have covered this pretty well by giving priority to through-traffic at T junctions, "top of the T goes before me".

BRONZ and ACC have put out a very useful website for motorcyclists, recommend it highly.

http://www.rideforever.co.nz/
Posted by johnnyreb at 10:15 PM No comments:

This one was a must see on account, despite being a record expense production, bombed on release.
It was entertaining, but just a day later, near forgettable.
The story its based on was written 100 years ago so I read recently, that's around 1912, and the flying contraptions certainly looked like it.
Maybe that's why its failing to gain traction. The story would have been more believable without the clunkers.
Posted by johnnyreb at 9:54 PM No comments:

We havent had a decent summer but this week's been as good a spell of weather as we've had, and the 400 km swoop down to Tauherenikau on the CB today, to watch one of the nags run was total joy.
Southern Wairarapa's really swinging as a tourist destination, sign-posts point the way to a multitude of off-highway diversions, including local museums, wineries, farmy stuff, and even NZ's own Aotearoa Stonehenge, a plywood mock-up.
Carterton, Featherston, Greytown, and Martinborough have pursued the boutique shopping/cafe experience, and even for a Monday, were quite busy.
Going over there feels like a trip to another country, its got that Canterbury feel about it, without the South Island extensiveness. Its looking a picture this year, having got its share of the good rainfall the country's had.
Well worth a long weekend.
Or two. 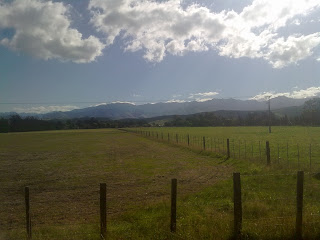 Posted by johnnyreb at 10:36 PM No comments:

The night in Wellie wasnt a write-off by any means.
Great company, with a quick redeemer dinner at Hummingbird, lamb shoulder, maybe a little tough but flavour just right with nice vegies, and the seafood platter at $30 odd, scallops, mussels and shrimp mostly, a grand enough meal that alone would do for two. And you could skip the bread and dips appetiser.
Wellington was pretty much booked out with last weekend of the Arts Festival, and the Hurricanes playing Highlanders same night, but through stalwart booking.com got one of the last rooms at Century Apartments, Tory St, smart room at a very reasonable price, and drive-in parking building adjacent.
Eventful trip home too.
Police breath-test road block at 7am along the waterfront, detour from Mana over Paekakariki Hill due to a fatal at Pukerua Bay, but at Levin, Raewyn's Cafe was open for a 'small' steak and eggs, one of the best steaks you can get in NZ, but be careful to be super hungry if you order the 'large'. She's open about 6 am weekends, and 2am week-days, closes around 2pm, best breakfast place, down-home quality, serve size, menu, and value, in NZ in my book.
Another detour around central Levin, big shop fire, and another police road-block in Sanson for rego/wof check, drop off mate, and back over the Saddle Road to Woodville Clay Target range for the bi-annual match between Wanganui and Wairarapa Ulysses, with a big thanks to Woodville for their assistance with the shooting, and a top cold beef, salad, spud and peas lunch.
Quick look at the windmill power farm on the way home, hundreds up there now, hard to believe all these stories you read about the technology being suspect, more nimby drivel I suspect.
Top weekend. 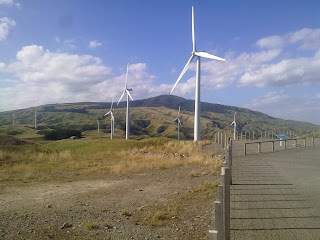 Posted by johnnyreb at 8:18 AM No comments:

I always judge a show, book, or movie on the impression it's made on me, and whether the impression remains strongly in my head in the following days.
This opera, part of the NZ Arts Festival, 2 days later still is, but I'm struggling for reasons why. I guess in the final analysis, art is in the eye of the beholder, and maybe I don't possess enough "art" boxes to adequately tag it.
The score was melodically bereft to my ear, despite some of NZ's best voices being in cast, Phillip Rhodes, Jonathan Lemalu, and Deborah Wai Kapohe, but this couldnt have been a reference surely, to polynesian song being more dirge than melody prior to european influence, or was it just matched to the seriousness of plot?
The set was just OK..., un-extravagant, but the film-over backdrop did work reasonably enough.
So then, you'd rely on plot to lift the game?
Well, compared to the history books, was accurate, but too belaboured in the first half, and too fast in the second, although the show's tempo got a welcome lift from the latter.
Under the 'all art is a political statement' criteria, this production reeked, but there is a nuance in the subject of the opera, Hohepa's imprisonment story, that deserves to be retold, around the unjustness and circumstance of the incarceration, and the care and concern of his old neighbours.
There were unexpected elements of humour, and I cant decide whether they were incongruous in the telling of a sad and serious story or not.
Certainly, with my maori upbringing, I was throughout uncomfortable with the publisation of a death and exhumation private to the family and tribal connections, and I guess all kia kaha to them for the bravery in permitting this story to be presented this way, but there again...., politics?
Frankly, even as a well-descended maori, I'm getting pretty annoyed at the continual reminder of past injustice and land theft.
Do all the packed-house cooing and ahhing grey-haired liberati expect that if push ever came to shove, they'll get to keep all their nice Khandallah homes in return for their sympatico, while all us despised farmers get booted off our farms in the Great Reparation?
Yeah right....
In conclusion, courageous, and obviously not without impact, or I wouldnt have written this. It made me think, but I'd struggle to say I was entertained.
Would I see it again?
Not for the $100 a good seat, and nor for the cheaper chance to perch in the uncomfortable, ill-view affording Gods in Wellie Opera House either.
Posted by johnnyreb at 7:26 AM No comments:

Book: Now You See Her

Now she vanishes. A crime yarn set in Florida.
Heard a lot about James Patterson, this is the first one I've read, and he's great.
The short chapters are odd to get to grips with, but actually make for an easy read.
The pace is a real ride, and all credit to this author, is faultless. The plots swirl, then come together neatly.
With the short takes, this'd make a fantastic movie.
Oddly enough, came across another Patterson in the same week, "Lifeguard". Same setting, a lesser version of the above, but another worthwhile read
Posted by johnnyreb at 12:01 AM No comments: